Dirt track racing is one of the most common forms of auto racing across the United States. The country is home to over 700 dirt tracks that provide exciting races for different types of cars. The races are always exciting and hosts thousands of spectators at every race.

This type of racing has become popular due to the unpredictable results of every race. No two tracks are the same as the owners choose different mixtures of clay and dirt on each track. Tracks also differ in length and corners in terms of how they are banked and how long they are. 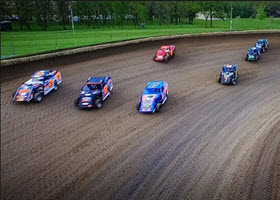 With these facts playing a major role in every race, it can become difficult to predetermined a winner. Unlike tarmac racing, it’s not all about being the fastest and giving up the lead first. Drivers are required to be constantly aware of their surroundings as a simple tap from another driver can send you into a spin causing the driver to end up at the back of the race. Many of these drivers know how to react to contact from other drivers and still remain in the race. All these types of skills are a must with dirt track racing.

The sport also consists of various types of cars that offer a completely unique race experience to other dirt track cars. Each of these classes have different rules and requirements to ensure safety for both the drivers and spectators.

Open wheel cars are one of the most commonly raced car types of dirt racing. These are simply referred to as open wheel has no covers appear over the wheels. The wheels are also external of the car body and include various classes. Dwarfs are replicas of cars from 1928 up to 1948. Karts referred to go karts that are raced on oval to the tracks. Mini-sprints usually consists of drivers from as young as 12 years old and use a 600 cc engine. Winged sprints are the more powerful cars producing up to 500 horsepower from a 410, 360 or a 305 cubic inch engine, these cars come with for a massive winning above the driver and a smaller wing in the front to produce down force. Non-winged sprint cars use the same body as the winged cars, but do not having any wings and use a smaller engine.

Modified cars are similar to open wheel cars in many ways. One of the major differences is that the back wheels are covered, but the front wheels remain exposed. This type of racing also consists of different rules and requirements for each car. Various classes can be expected with modified cars.

Full bodied cars consist of various classes including late models, non-production cars and are also referred to as stock cars. Once again, different rules apply to this type of racing when compared to open wheel or modified cars. These cars have bodywork over all four wheels and usually produce a lot more power. The cars reach speeds well over 100 miles per hour with a v8 engine producing up to 850 horsepower.