Drag racing is yet another American sport that has become very popular across the entire world. These races take place in a straight line and in of consist of the corners. Each race takes place between two cars, although some American tracks can accommodate up to four cars at the same time. Most of these cars produce incredible power and shootout against each other by racing down the track to see who crossed the line first. This form of racing has spread to the legal street racing, which will not be covered in this article. Instead, we will be looking at the various types of drag racing in the Midwest. The Midwest provides a full range of drag racing cars including a everything from sports compact right through to the fastest top fuelers and all the series that fits in between.

Top fuel race cars are known as the fastest dragsters. These reach incredible speeds over short distances and on loan to cover the track of 400 metres in as little as 3.8 seconds. In this distance from a standing start they are known to reach speeds of over 325 miles per hour. These cars consist of small narrow front wheels and big slick back tyres. They are a 25 feet long and run on methanol that has been mixed with up to 90% of nitromethane. 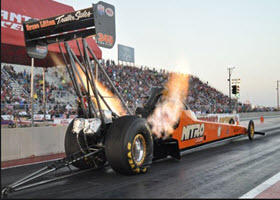 Popular race cars also appear in another series called top alcohol dragsters. These have some restrictions, but can still cover ¼ mile in around 5 seconds at 218 miles per hour.
Top fuel also covers another class called funny cards. These cars are similar to top fuelers, but consist of a full body that covers all four wheels and a shorter wheelbase. These cars run by ¼ mile in just 4 seconds and are known to reach speeds of over 300 miles per hour.

Top alcohol funny cars have very similar restrictions to those of top alcohol dragsters and are known to reach speeds of 265 miles per hour and cover ¼ mile in under 5.5 seconds.

Pro stock cars are often referred to as door slammers and usually resemble some type of production car. These cars used engines consisting of more than 500 cubic inch’s and can rev higher than 10,500 RPM, which produces over 1,300 horsepower. With this type of power, races can expect to cover ¼ mile in just over 6 seconds while reaching speeds over 210 miles per hour. 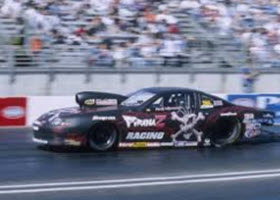 Pro stock motorcycles are purpose built and use lightweight frames and carbon fibber body work usually replicated from a production bike. These have the ability to cover ¼ mile in just under 7 seconds and reach up to 200 miles per hour over the short distance.

The pro modified series are also referred to as top door slammers. These cars have some restrictions, but still produce incredibly high powered race engines. Cars are allowed to run turbochargers, super charges or nitrous. Engines are also limited to 527 cubic inches, but with nitrous they are unable to run up to 740 cubic inches.