Street racing is a form of illegal racing that takes place in most countries around the world. In the Midwest this is quite popular as all the major modifications are available to the public. Street racing has many different levels when it comes to experience and the cars that are raced. In most cases these cars are not highly modified, but in others the cars used for street racing should actually only be used on a racetrack providing a controlled environment.

Races usually take place late at night when the roads are quiet. In some cases roads are blocked off by the participants or spectators of the race, allowing them control and no interference from the usual traffic. This type of traffic blocking also gives the participants a chance to get away in case of a police raid. This form of racing is very similar to those we have all seen in movies such as Fast n Furious. However, in most cases of these types of movies the cars are made to look much faster and easier to control. 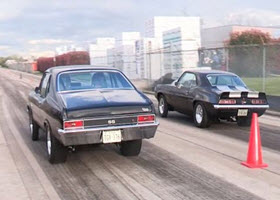 In reality, street racing also requires incredible skills especially when highly modified cars are used. Different forms of racing take place on the streets that includes a rally type race starting at a certain point and finishing at another. In some cases a circuit is also created that involves normal city streets. The most popular form of street racing is drags, which requires two or more cars to race against each other in a straight road.

Not only is this form of racing illegal as the cars usually exceed the speed limit, but it is also illegal for any type of racing to take place on city roads. The real danger comes in with the safety of drivers and the spectators. In many cases drivers are inexperienced and race with high powered cars. The cars are pushed to their limits, which is considered dangerous even for experienced drivers. Furthermore, these cars are raced in uncontrolled environments that does not offer the same safety as a racetrack.

There has been many cases where street racing cars have lost control and crashed in to spectator crowds that results in multiple deaths. Many of these cars have also been destroyed with these accidents, costing the owners incredible amounts of money as these modifications do not come with a small price tag.

Street racing does not offer any benefits, although some may disagree as a wager is usually placed between drivers. These wagers can include a few $100 or bigger wagers can go up to the pink slip of your car, which means the win of the race will take the ownership of the other driver’s car.

The street racing usually involves factory built cars that have been modified in various ways. These modifications include incredible increases in power while also a decreasing the cars weight. Typical modifications are usually include turbochargers as well as supercharges depending on the type of car. Some drivers take the precaution by including roll cages, but in most cases these drivers preferred to spend the money on additional modifications to make their cars even faster.