Non-Winged cars offer benefits of their own, but are definitely not as big as the winged car race series. These cars are also extremely fast, but few small amount is an produce less power than those in the winged car series. Most would say that the non-winged cars offer a more exciting race experience for the driver and requires more skill with cornering.

As mentioned above, the non-winged cars use smaller engines that produce less power. Nevertheless, these cars are still considered highly powerful and have the ability to achieve incredible speeds on the short circuit track. These cars are also popular in Australia with their non-winged race division. This division consists of over 350 non-winged sprint cars and are raced on the western and southern coast. 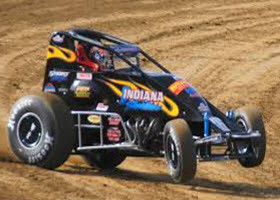 These cars are mostly use a six cylinder engine producing up to 500 horsepower, which converts into about 370kW. With this power drivers are able to reach speeds in access of 112 miles per hour (180km/h), which is easily achieved as the cars to are not require strong down force as the bigger winged cars. The car itself is designed in the exact same manner as to the winged series, but obviously excludes the top and front wing.

The non-winged racing series offered various benefits to the drivers and teams. Firstly, because the cheaper to build as the winnings will not required. This means less engineering to the frame and the build of the actual wing. A smaller crew could also be used as the car simply required less maintenance and safety checks.

These cars are also considered a perfect step for racing drivers changing from midget cars to the big fully winged racing machines as they produce less power and requires the driver to focus more through corners, which at the end of the day produced a better racing driver overall. The cars are also known as fast as the fully winged race cars, meaning they are more for giving with small mistakes.

The non-winged race car offer a variety of benefits, but unfortunately a few disadvantages are also present. The whole idea of the winged car is to make it more stable and safe for the driver. Without the wings, the car has the possibility of going airborne during a race. The wings are also provides protection for the driver in the case of the car of flipping or rolling.